Can you buy health insurance now?

The COVID-19 pandemic has caused millions of Americans to lose their jobs, and in many cases, that means losing health insurance as well. About half of all Americans get their health insurance from an employer’s plan, and it’s a cruel irony that so many people have lost their jobs in the midst of a time when we need health coverage more than ever. A Commonwealth Fund analysis found that by June 2020, nearly 15 million Americans had lost their employer-sponsored health insurance. And about 5.4 million of them became uninsured (as opposed to switching to another form of health coverage), resulting in the largest-ever increase in the uninsured rate.

But the good news is that loss of coverage triggers a special enrollment period during which you can buy ACA-compliant individual health insurance. You can buy your new coverage on- or off-exchange, although premium subsidies and cost-sharing reductions are only available through the exchange.

Loss of a job does not, in and of itself, trigger a special enrollment period. The special enrollment period only applies if you’re losing health coverage (the plan you had must have been minimum essential coverage – which all employer-sponsored plans are – and you can’t have voluntarily canceled the plan or lost it due to non-payment of premiums).

A drop in income that makes a person newly-eligible for financial assistance in the exchange will trigger a special enrollment period during which a person can switch plans – but that only applies if they already had minimum essential coverage in place before the income change.

If you’re uninsured, whether it’s a recent development or a long-term situation, you may still be able to obtain coverage for 2021. Here’s a summary of your options: 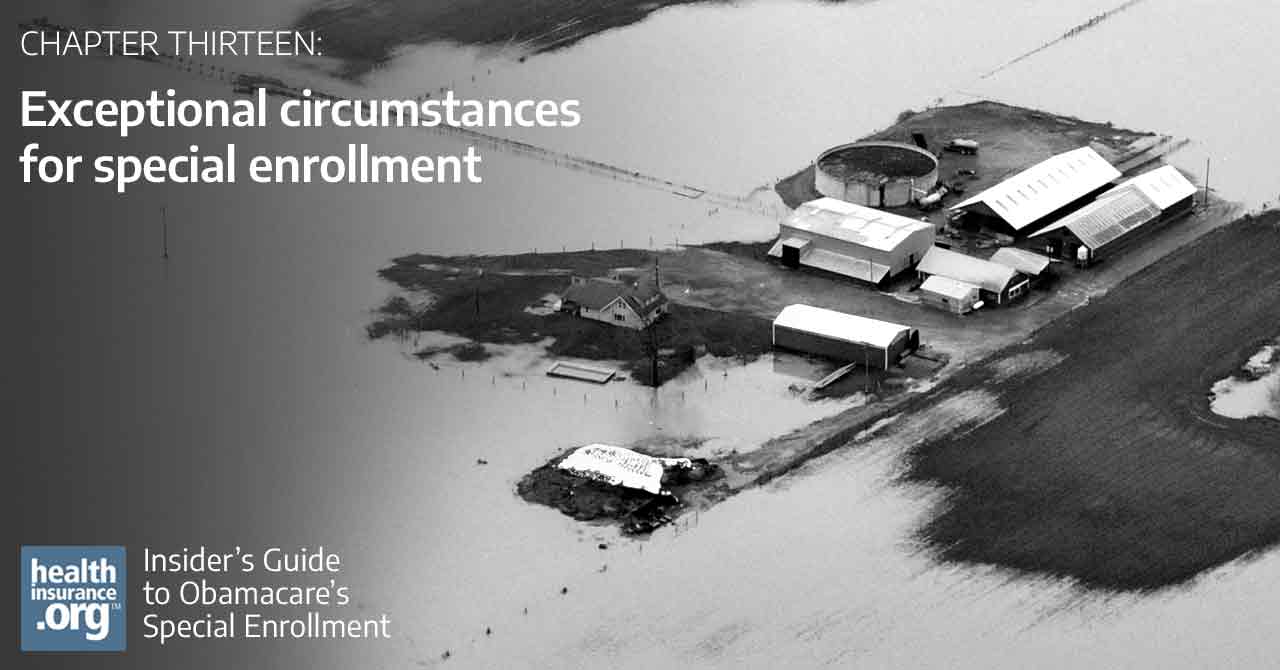 Click to see which states are offering special enrollment periods in response to the coronavirus pandemic.

In most states, open enrollment for 2021 health plans ran from November 1 to December 15, 2020. This gave people an opportunity to sign up for new individual/family health coverage if they needed it. And in 10 states and DC, open enrollment is still underway as of early January 2021.

In addition, Maryland has opened another COVID-related special enrollment period for uninsured residents (people who don’t currently have minimum essential coverage), which will continue through March 15, 2021. Unlike normal enrollment period rules, Maryland is allowing retroactive coverage in some cases, and effective dates that are never more than two weeks after the enrollment is submitted.

Maryland previously offered a COVID special enrollment period that ran from March to December in 2020. Most of the other fully state-run exchanges also offered special enrollment periods in 2020 to address the COVID pandemic, allowing people without health coverage a chance to sign up without having to wait for open enrollment or experience a specific qualifying event. But with the exception of Maryland, those windows are no longer ongoing.

Most states use HealthCare.gov, which is run by the Department of Health and Human Services (HHS). Throughout 2020, the Trump administration refused to open a special enrollment period through HealthCare.gov – despite the fact that several states that use the federally run exchange asked HHS to do so. The Biden administration might open a COVID-related special enrollment period after taking office in January 2021; this is one of the recommendations that state insurance commissioners have made to President-elect Biden, and it’s well within the scope of immediate changes the incoming administration could make to ensure more people are covered.

2. Loss-of-coverage special enrollment period (and other SEPs that might apply to your situation)

If you’re in a state where open enrollment has ended, you’ll need to have a qualifying event in order to enroll in coverage. Our guide to qualifying events and special enrollment periods covers all of the details about how these work, including rules for effective dates and prior coverage requirements.

And if your income has taken a hit, know that if you enroll in a plan through the exchange during a special enrollment period, you may qualify for financial assistance (premium subsidies and cost-sharing subsidies). Use this subsidy calculator to estimate the size of your subsidy.

But the effective date rules are different if your qualifying event is the loss of your existing health coverage. If you’re losing your coverage, you can enroll up until the last day you have coverage and your new plan will take effect the first of the following month. Since health plans usually terminate on the last day of a month, this means you can have seamless coverage in most cases, as long as you enroll by the day that your old plan ends, and assuming your old plan is ending on the last day of the month (if your plan is ending on a day other than the last day of the month, it will likely not be possible to have seamless coverage unless you’re able to qualify for Medicaid). So for example, if you’re getting laid off and your employer-sponsored coverage is going to end on January 31, you have until January 31 to enroll in a new plan (on- or off-exchange) and your coverage will take effect August 1.

It’s important to understand that in many cases, you’re only eligible for a special enrollment period if you already had some sort of minimum essential coverage in place before the qualifying event – this is obviously true if your qualifying event is loss of coverage, but it’s also true for several other qualifying events. You can read more about the rules for each type of qualifying event here.

Not eligible for a SEP or Medicaid (or CHIP, a Basic Health Program, Medicare, etc.)? Unless a blanket COVID special enrollment period is opened via HealthCare.gov (and other state-run exchanges follow suit), you’ll have to wait until next fall’s open enrollment to buy coverage, and the plan won’t take effect until next January. But as described below, a short-term health insurance plan might still be an option, and it would allow you to have coverage this year.

3. Losing your income? Apply for Medicaid.

What state do you live in?

Millions of Americans have faced a sudden drop in income as a result of the COVID-19 pandemic. But the majority of the states have expanded Medicaid under the Affordable Care Act, which allows residents with low income (up to 138 percent of the poverty level) to enroll in Medicaid.

Medicaid enrollment is year-round, as is CHIP (Children’s Health Insurance Program) enrollment. And CHIP eligibility extends to higher income levels than Medicaid. For both Medicaid and CHIP eligibility, income is calculated on a monthly basis, so they are available if your current income is within the eligible range – even if your income later in the year is expected to be much higher.

Medicaid coverage can also be immediate, or backdated to the first of the month or even a previous month, depending on the state and the circumstances. (States can seek federal approval to eliminate prior month retroactive coverage availability, and some have done so under the Trump administration). So you won’t have to wait for your Medicaid coverage to take effect.

In states that have not expanded Medicaid, coverage is not available based solely on income; low-income residents have to also meet other criteria, such as being pregnant, caring for minor children, being elderly, or being disabled. But if you’re facing a loss of income, you’ll want to check with your state’s Medicaid program to see if you might be eligible for coverage.

When your income picks back up in the future and makes you ineligible for Medicaid, that will trigger a loss-of-coverage special enrollment period during which you can enroll in a private individual market plan or an employer-sponsored plan if one is available to you. Note that in order to qualify for the additional federal Medicaid funding that’s being provided to states to address the COVID-19 pandemic, states cannot take action to terminate Medicaid coverage until after the COVID-19 emergency ends. Your Medicaid coverage can be terminated if you request it — perhaps because you become eligible for a new employer’s plan, or your income increases enough to make you eligible for premium subsidies in the exchange — or if you move out of state. But otherwise, your Medicaid coverage should continue until the end of the COVID-19 emergency period. If you request a termination or move out of state, however, your Medicaid coverage will end and that will trigger a special enrollment period during which you can sign up for a private plan.

For millions of Americans who aren’t eligible for a SEP or Medicaid, buying a short-term medical plan offers the fastest way to get some level of coverage in place. Short-term plans aren’t ACA-compliant, but can still provide protection from catastrophic medical expenses – and you can purchase the plans at any time during the year.

That means you could buy a short-term plan today and – if you’re approved through the underwriting process – you could have coverage in force as soon as tomorrow.

Short-term coverage is temporary, but federal regulations now allow short-term plans to have initial terms of up to 364 days, and total duration, including renewals, of up to three years. Many states have their own rules, however, that limit short-term plans to shorter durations than the federal rules allow.

And the basic rules of thumb for short-term plans still apply: Pre-existing conditions are generally not covered at all, and insurers will tend to look back at your medical records if and when you have a claim, to make sure that the claim isn’t related to any condition you might have had before enrolling. Short-term plans are also not required to cover the ACA’s essential health benefits, which means that some of the treatment you might need for COVID-19 (or other conditions) might not be covered at all by the plan. Many short-term plans do not, for example, cover outpatient prescription drugs. Others place limits on how much they’ll pay for inpatient hospital care.

New York and Minnesota have Basic Health Programs (the Essential Plan and MinnesotaCare), both of which offer year-round enrollment and are available to residents with income up to 200 percent of the poverty level.

Massachusetts has a program called ConnectorCare, which is available to residents with income up to 300 percent of the poverty level. ConnectorCare enrollment is available year-round, but only for people who are newly eligible or who haven’t enrolled previously.

If you’re in one of these states and have an eligible income, you may still be able to sign up for coverage regardless of what time of year it is.

The post How to buy health insurance during the COVID-19 crisis appeared first on healthinsurance.org.

If an individual pays for an exchange plan, how do they pay for the premium...