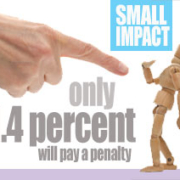 No longer a federal penalty, but some states impose a penalty on residents who are uninsured

Vermont enacted legislation to create an individual mandate as of 2020, but lawmakers failed to agree on a penalty for non-compliance, so although the mandate took effect in 2020, it has thus far been essentially toothless (the same as the federal individual mandate, which remains in effect but has no penalty for non-compliance). Vermont could impose a penalty during a future legislative session, but the most recent legislation the state has enacted (H.524/Act63, in June 2019) calls for the state to use the individual mandate information that tax filers report on their tax returns to identify uninsured residents and “provide targeted outreach” to help them obtain affordable health coverage.

2014-2018: Everything you need to know about the federal individual mandate penalty

Although the ACA included provisions to make it easier to buy health insurance – including Medicaid expansion, premium subsidies, and guaranteed-issue coverage – it also included an individual mandate that requires Americans to purchase health coverage or face a tax penalty, unless they were eligible for an exemption).

But the GOP tax bill that was signed into law in late 2017 repealed the individual mandate penalty, starting in 2019 (See Part VIII, Section 11081 of the text of the Tax Cuts and Jobs Act). Although the law was enacted in 2017, there was a delay of more than a year before the Obamacare penalty repeal took effect, and people who were uninsured in 2018—after the law was enacted—still had to pay the individual mandate penalty when they filed their tax returns in 2019.

The individual mandate penalty helped to keep premiums lower than they would otherwise have been. There was no Obamacare penalty back when insurers were allowed to reject applicants with pre-existing conditions, but with coverage now guaranteed-issue, it was important to have a mechanism to ensure that healthy people would remain in the pool of insureds. The individual mandate was part of that, but the ACA’s premium subsidies are likely playing an even larger role, as they keep coverage affordable for most middle-class enrollees, regardless of whether they’re healthy or not.

The Congressional Budget Office has estimated that premiums in the individual market will generally trend 10 percent higher without the individual mandate penalty than they would have been with the penalty. Unsurprisingly, most of the rate filings for 2019 included a rate increase related to the elimination of the penalty. That is now baked into the standard premiums going forward, so the higher rates apply in future years as well.

The individual mandate has long been the least-popular consumer-facing provision of the ACA, although most Americans already had health insurance before the ACA, and didn’t need to worry about the penalty for being uninsured.

It’s worth noting that the elimination of the individual mandate penalty is the crux of the Texas v. US (California v. Texas) lawsuit, which seeks to overturn the entire ACA. The case was heard by the Supreme Court in November 2020, and a ruling is expected in the spring or early summer of 2021.

Although there were still 33 million uninsured people in the US in 2014, the IRS reported that just 7.9 million tax filers were subject to the penalty in 2014 (out of more than 138 million returns). According to IRS data, 12 million filers qualified for an exemption.

The number of filers subject to the ACA’s penalty was lower for 2015 (on returns that were filed in 2016), as overall enrollment in health insurance plans had continued to grow. The IRS reported in January 2017 that 6.5 million 2015 tax returns had included individual shared responsibility payments. But far more people—12.7 million tax filers—claimed an exemption for the 2015 tax year. For 2016, the IRS reported that 10.7 tax filers had claimed exemptions by April 27, 2017, and that only 4 million 2016 tax returns had included a penalty at that point.

A full list of exemptions and how to claim them is available here, including a summary of how the Trump administration made it easier for people to claim hardship exemptions (hardship exemptions continue to be important in 2019 and beyond, as they’re necessary for people age 30 and older to be able to purchase catastrophic health insurance plans).

Most Americans weren’t affected by the penalty

As noted above, only 4 million tax returns for 2016 included the ACA’s individual mandate penalty (as of late April, 2017; people who got a tax filing extension hadn’t yet filed by that point, so the total number of filers who owed a penalty likely ended up higher than 4 million). The vast majority of tax filers had health insurance, and even among those who didn’t, penalty exemptions were more common than penalty assessments.

Individual market major medical plans available on or off-exchange are considered minimum essential coverage, and so are grandfathered plans and grandmothered plans. And although health care sharing ministries are not considered minimum essential coverage, people with sharing ministry coverage were eligible for one of the exemptions under the ACA.

Plans that aren’t considered major medical coverage are not subject to the ACA’s regulations, and do not count as minimum essential coverage, meaning people were subject to the penalty if they relied on something like a short-term plan and were not otherwise exempt from the Obamacare penalty. Things like accident supplements and prescription discount plans may be beneficial, but they do not fulfill the requirement to maintain health insurance.

How big were the penalties?

Although the average penalties are in the hundreds of dollars, the ACA’s individual mandate penalty is a progressive tax: if a family earning $500,000 decided not to join the rest of us in the insurance pool, they would have owed a penalty of more than $16,000 for 2018. But to be clear, the vast majority of very high-income families do have health insurance.

Today, the median net family income in the United States is roughly $56,500 (half of U.S. families earn less; half earn more.) For 2018, the penalty for a middle-income family of four earning $60,000 was $2,085 (the flat-rate penalty would have been used, because it was larger than the percentage of income penalty; see details below, under “how the penalty works”). This is far less than the penalty a more affluent family would have paid based on a percentage of their income.

The maximum penalties rarely applied to very many people, since most wealthy households were already insured.

No longer a question on federal tax return about health coverage (but it’s still on some state returns, and Form 8962 is still applicable if you get a premium subsidy)

From 2014 through 2018, the federal Form 1040 included a line where filers had to indicate whether they had health insurance for the full year (see the upper right corner, under the spaces for Social Security numbers).

But since 2019, Form 1040 has no longer included that question, as there’s no longer a penalty for being without coverage.

But state tax returns for DC, Massachusetts, New Jersey, California, and Rhode Island do include a question about health coverage. Maryland’s tax return also asks about health insurance coverage, in order to try to connect uninsured residents with affordable coverage. Colorado’s tax return will have a similar feature as of early 2022 (but Maryland and Colorado do not penalize residents who don’t have health insurance).

In addition, nothing has changed about premium subsidy reconciliation on the federal tax return. People who receive a premium subsidy (or those who enroll through the exchange in a full-price plan but want to claim the subsidy at tax time) will continue to use Form 8962 to reconcile their subsidy. Exchanges, insurers, and employers will continue to use Forms 1095-A, B, and C to report coverage details to enrollees and the IRS.

How the penalty worked

[Note that in most cases, the states that are implementing their own individual mandates are following this same basic outline in terms of how the penalty works, with the details based on the federal penalty levels that applied in 2018.] Your individual mandate tax is the greater of either 1) a flat-dollar amount based on the number of uninsured people in your household; or 2) a percentage of your income (up to the national average cost of a Bronze plan , as determined by the IRS and adjusted annually to reflect changes in premiums).

The post Will you owe a penalty under Obamacare? appeared first on healthinsurance.org.